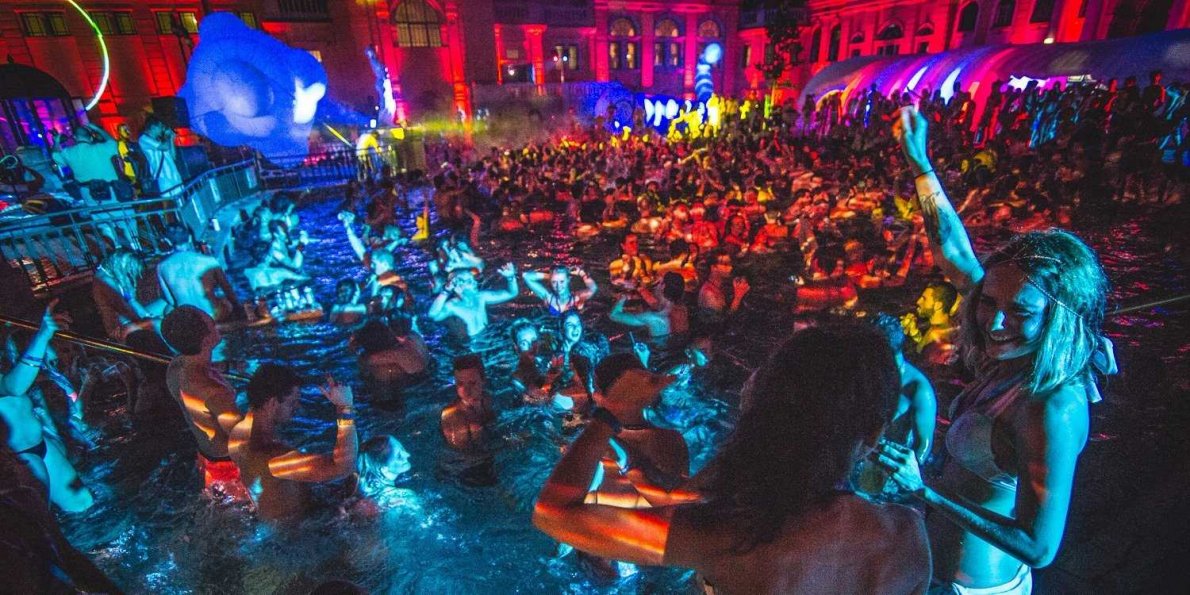 I love that in Budapest, I can spend the evening quaffing and learning about local craft beers, listening to Romani music, dancing at one of the city’s thermal bath parties or sipping a full-bodied Kekfrankos from one of Hungary’s vineyards. Here’s my roundup of the best nightlife experiences to seek out.

Drink up at the derelict-chic ruin bars
Budapest ruin bars, watering holes residing in tattered buildings, transformed these forgotten spaces into atmospheric bars, with twinkling fairy lights, aging bric-a-brac and rusty bicycles defining the decor. Imbibe at Szimpla Kert, the pioneer that created the genre of ruin pubs in Budapest. It’s enormous with endless warrens to quaff in, local artists pieces grace its walls and its summer garden contains a hollowed out Trabant (an East German communist-era matchbox car) to sit in.

Szimpla Kert
Kazinczy u. 14.
+36 1 3524198
http://szimpla.hu
Sample pints by gypsy brewers and established stalwarts on a craft beer walk
The craft beer scene is erupting in Budapest, and so many beer bars open regularly it tough for the locals to keep up. Taste Hungary offers a chance to visit three venues and educates you with the history of Hungarian brewing, the development of the craft beer scene and the flavors that dominate Budapest taste preferences. To understand the origins of Hungarian beer, you’ll taste a traditional brew followed by about eight craft beers, plus light nibbles along the way.

Taste Hungary craft beer walk
http://tastehungary.com/tour/craft-beer-walk
Party and bar hop at Budapest’s gay bars and clubs
Funny Carrot (facebook.com/funnycarrot.drinkbar) is one of the city’s oldest gay bars—it’s tiny main space ensure immediate conversation with your neighbor, and in summer the scene spills out into the street creating an impromptu al fresco party. Or heady to the always-popular underground dance party at Garcons, (www.facebook.com/garconsbudapest), a dance party series that attracts mainly gay and lesbian scenesters but is open to sexual preferences of any flavor.

Taste Hungarian wines while jamming to live music
Hungary’s most famous wine export is the sweet Tokaj, but its wine pedigree covers a wide range of varietals. Doblo wine bar’s selection leans to Hungarian artisanal organic wine and offers both big names and smaller producers. Tasting flights include Hungarian intro sessions and mixed flights ending with Palinka, a Carpathian fruit brandy. Come not only for the chance to sample jammy, full-bodied Kekfrankos from the sunny Villany wine region or dry Pinot Gris from lakeside Badacsony, but to enjoy the vaulted brick space and enjoy the regular live music gigs playing while you sip—think guitar duets, mellow rock and jazzy blues.

Boogie in your bathing suit at an evening bath party
After dark, two traditional bathhouses turn up the heat and morph into libidinous dance parties. DJs jam it up with electronic, funk and psychedelic music while neon laser beams flicker across the water. In summer the grand Széchenyi Baths play host, and in winter the 19th-century Lukács Baths take over-at both the outdoor (heated) pools are where the party takes place. It’s not tame, but it’s not a wet college drunkathon gone wild either.  Imagine organized, classy debauchery, with a splash of serious fun.